The Facelift Procedure - Trust your face to a Specialist. - Dr. Ben Light

Home › Blog › The Facelift Procedure – Trust your face to a Specialist. 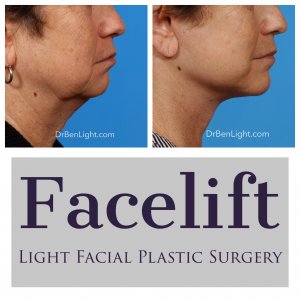 The word “facelift” is not really the best descriptor of its results. Since a facelift tightens the neck, smooths the cheeks and refines the look of the jawline, it might be better called a “lower facelift” or “upper neck lift.” This procedure is the gold standard for lower facial rejuvenation. The results are significant, proven, and lasting. Say a woman had a facelift which made her look ten years younger than her twin sister; she would continue to look ten years younger over time as they both continued to age. When a person is serious about achieving significant results, a facelift should be explored as an option.

There are other reasonable approaches to deescalating signs of lower face and neck aging, but they are always measured against the facelift as the gold standard.  We offer very solid alternatives to a facelift at Light Facial Plastic Surgery. These alternatives include, but are not limited to Ultherapy, Morpheus, facial fillers used in the lower face (sometimes called “liquid facelift”), FaceTite and AccuTite, and CO2 laser facial resurfacing. Easily combined for maximum effect, each above option plays its unique role in the treatment spectrum of effective facelift alternatives. 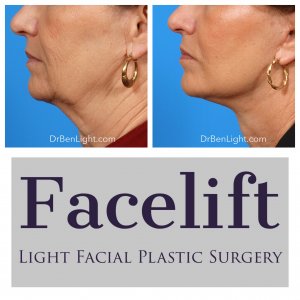 One procedure branded as being like a facelift, but not recommended by Dr. Light is known as a string or thread lift. The mechanism of a thread lift is completely different from a facelift and its results are of disappointingly short duration in Dr. Light’s opinion (unlike the twin sister example above).  This option is usually touted by providers not trained in facelift surgery or not equipped/certified to do surgery at all. At LFPS, we have taken preoperative photos of patients who elected to undergo a string lift elsewhere as an alternative to conventional facelift. Six months to a year later, when these patients returned and had new photos taken, there was no perceivable change in their appearance from the thread lift procedure. The tightening effect only lasted for a few months, but the patient now has a barbed string foreign body permanently embedded in their facial tissue. This makes them a more challenging candidate to receive the traditional lift procedure.

I went to Dr. Light to see about having a blepharoplasty to correct my drooping eyelids. He recommended two steps for me: A brow lift and later the blepharoplasty. BEST decision that I have ever made for myself. The brow lift is a surgery I would not have even considered, but I...

Dr. Light, With sincere gratitude and appreciation I would like to thank you for your expertise, talent, and wonderful care. Without a doubt you have given me back my youthfulness and I am completely happy with your work. I wanted to look like “me” without the family trait of what I call...

I feel fortunate to have selected Dr. Light as my physician. Another medical professional recommended him based on feedback gleaned from patients and medical personnel. Technical skills is integral to positive feedback. However, in a realm that depends on aesthetic sense and a more subjective range of factors there are additional criteria...

I am very pleased with the results of my CO2 Fractional Laser treatments. The procedure improved the appearance and texture of my skin. As a result, I have recommended Dr. Light to many friends and colleagues in the North Alabama area.* *Individual Results May Vary

I was never one who ever considered injectable cosmetics instead believing that I would spend a lot of money to end up with the “frozen face” look. After many wasted years and untold thousands of dollars invested in packaged cosmetics, I found Dr. Light. I can now say that I am a...